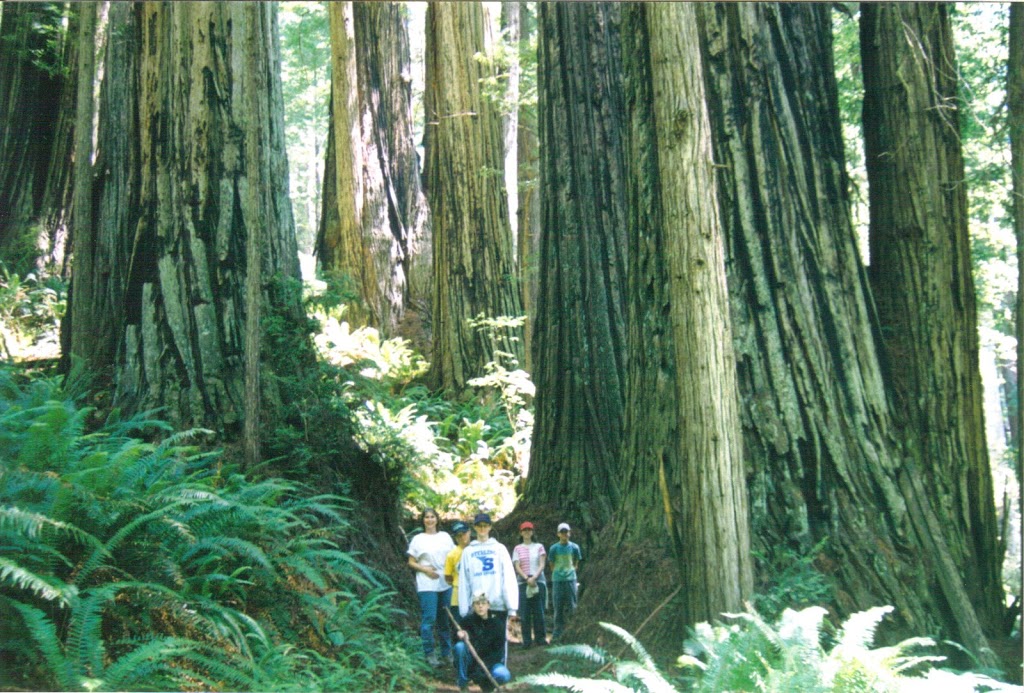 Our hearts go out to those suffering from the effects of the devastating fires in California. As flames consume thousands of acres of beautiful trees and brave people try to keep fires contained, I wanted to focus on what fires can do for forests.

We’ve learned about two special trees out west that require hot fires to propagate. The Sequoias and the Redwoods. Our family was lucky enough to journey from the east coast all the way across the United States to California to visit Kings Canyon and Sequoia National Park  and the RedwoodNational and State Parks.

Sequoias and redwoods are impervious to fires and insects because of their 12 inch thick bark. These giants usually die by toppling because of a lack of tap root, a main root that drives straight down as the tree grows straight up and anchors most trees to the earth. Instead, the sequoias and redwoods have root structures that travel beneath the soil for miles in all directions.

These unique trees require hot fires to release seeds from their pine cones. The sequoias are the largest living thing on earth, according to the park rangers. And the redwoods are the tallest living thing, towering over 300 feet high.

But about those hot fires.  These massive giants require the intense heat from the flames licking at the base of their trunks to open their pine cones hundreds of feet up in the branches of the trees. In fact, fires are the only way sequoias propagate; a park ranger informed our family when we visited. Sequoias have egg-sized, woody, thick cones while redwoods have thin, spidery pine cones the size of a quarter.

Now the redwood can reproduce through cone seeds and when the tree topples. The downed giant becomes a “mother log” where the tree sprouts new growth from burls, roots, even cut stumps.

Fires also prepare the forest floor by burning the underbrush, creating a fertile seedbed of ashes for the rebirth of a forest. This is why the National Park Service just monitors “natural” fires that strike a forest; like lightning strikes. Sometimes, you may read on a park website or learn from a park ranger that there will be a “controlled burn” in the area. These smaller fires are used to keep that underbrush from building up, creating more devastating fires because of an overabundance of tinder on the ground.

That being said, fires can quickly get out of control, jumping roads and even canyons, caught in the winds of weather. I feel it is our duty to report any forest fires or heavy smoke we see to the park rangers or local fire departments. It is crucial that we maintain our beautiful national and state parks and forests for generations to come. This is what I teach my children: to respect our forests and our planet and to pray for the people who keep it safe. Our prayers are with those battling the fires in California.