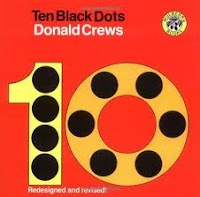 They have Math, too, in kindergarten. The lesson plan said, “Read the Ten Black Dots book to the class.” Then under that, the teacher noted “brainstorm with the children objects to draw.” I always worry about brainstorming with young children. I mean think about it. Of course there is going to be a “storm.” We have one adult brain pitted against twenty-five six-year-old brains. The last time I exchanged ideas with kindergarteners, I became hopelessly mired in the “Guess what?” scenario. So I was leery to open up a discussion about things that the children could draw ten of on paper relating to our Ten Black Dots book.

“Let’s name some concrete things to draw on paper,” I told my wiggly carpet sitters.

“Real things that you can touch,” I responded. “Like flowers.” I was thinking about what six-year-olds could draw.

“How about toes?” Another student asked.

“You can use eye balls,” a little girl said.

“Wait,” I tried to get hold of our ‘brainstorming.’

“But you have to be able to draw the ten things on paper for the teacher,” I said.

I felt my body being sucked into the swamp called “kindergarten math” and wondered how I was going to break free to move onto the next lesson. Then a quiet little girl whispered in my ear, “how about rainbows?”

“Rainbows,” I shouted above the din. Children can draw rainbows, I thought. I felt my feet loosen in the mire. I hugged the little girl and told her to return to the carpet as I knew others would rush me if she didn’t.

“Great,” I said, “we’ve got the idea now. Back to your tables to draw ten same things on the paper I will pass out.”

I pulled my feet completely free from the swamp and hurriedly passed out the paper so as not to allow my little Michelangelos to forget what they were to illustrate ten times. Then I gave each of them ten black dots to place on their drawing page.

Walking around the tables full of chattering students, reminding them that they only needed ten things, I did notice some eyebrows. At least, I think they were eyebrows. They could have been single-lined, charred rainbows. Only a few students had actually placed little hash mark hairs on their arched black lines. And then there were the toes…ten oblong black boxes–minus the toenails.